“For those who are unvaccinated, they are increasingly at risk as more and more variants develop,” Dr. Vivek Murthy told CNN on Wednesday, specifically citing the B.1.617.2, or Delta variant, first identified in India.
“The news about the Delta variant is evidence of really why it’s so important for us to get vaccinated as soon as possible,” he said, adding that the variant is more transmissible and potentially more dangerous.
Concern over the risk of variants bringing an end to a nationwide reopening is shared by many health experts and officials.
Dr. Anthony Fauci, director of the National Institute of Allergy and Infectious Diseases, noted in an interview with CNN that the United Kingdom was earlier stricken with the B.1.1.7, or Alpha, variant before Delta infections became predominant.
“We don’t want to let happen in the United States what is happening currently in the UK, where you have a troublesome variant essentially taking over as the dominant variant, which has made it a very difficult situation in the UK,” he said Wednesday, adding that the Delta variant accounts for more than 6% of sequenced virus in the US.
While the US has “done very well” with vaccinating its population, Fauci said, “we cannot declare victory prematurely because there are still a substantial proportion of people who have not been vaccinated.”
Vaccination rates throughout the country are continuing at an uneven pace. Eight states have fully vaccinated more than half of their residents: Connecticut, Maine, Maryland, Massachusetts, New Hampshire, New Jersey, Rhode Island and Vermont, which leads the country with nearly 60% of residents fully vaccinated, recent CDC data shows.
Alabama, Arkansas, Louisiana, Mississippi, Tennessee and Wyoming have among the lowest vaccination rates in the country, according to CDC data. And officials are urging citizens that the best way to get ahead of the variants is with vaccinations.
“The good news is that when they looked at the Pfizer vaccine, they found that it was quite effective after two doses at protecting against even the Delta variant,” Murthy told CNN. 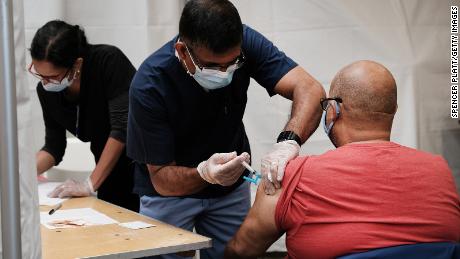 Another vaccine could soon be available to adolescents: Moderna has asked the US Food and Drug Administration to authorize its Covid-19 vaccine for emergency use in 12- to 17-year-olds, it announced Thursday in a statement. That vaccine is now available for people 18 and older.
“We are pleased to announce that we have submitted for an emergency use authorization for our COVID-19 vaccine with the FDA for use in adolescents in the United States,” said Moderna CEO Stéphane Bancel. “We are encouraged that the Moderna COVID-19 vaccine was highly effective at preventing COVID-19 and SARS-CoV-2 infection in adolescents.”
If authorized, Moderna’s would be the second Covid-19 vaccine available in the US to adolescents. The Pfizer/BioNTech vaccine, initially authorized for people 16 and older, was granted EUA last month for 12- to 15-year-olds.
Moderna previously released the results from a Phase 2/3 trial of 3,732 children between 12 and 17 in the US. Blood tests showed the vaccine produced an immune response equivalent to earlier findings in adults.
Initial observations found none of the children who received the vaccine got sick with Covid-19 starting 14 days after their second dose. Four kids who got a placebo tested positive for the virus.
Meantime, an FDA vaccine advisory committee is meeting Thursday to discuss, generally, what data is needed to support authorization of Covid-19 vaccines for children, including those younger than 12.

In another example of local optimism with improved Covid-19 numbers, about two dozen states have decided to scale back their daily tracking of cases, hospitalizations and deaths, Johns Hopkins University said this week.
Many states have scaled back to five updates each week, while others have dropped to three times or fewer. Florida, for example, has dropped to once per week.
Some health officials are calling this move premature in the face of current vaccination rates, citing needed improvement in these areas before states can let off the gas pedal regarding Covid-19.
“As far as I know, we’re still in a public health emergency as a country … That has not been downgraded yet,” Lori Tremmel Freeman, chief executive officer of the National Association of County and City Health Officials, told CNN on Wednesday.
“An ultimate goal is to get to the point where even those who remain unvaccinated are at far less risk — and nobody that I know has really landed on that number,” Freeman said of herd immunity.
Several states also this week announced plans to further loosen Covid-19 protocols. South Carolina lifted an emergency order placed on the state, touting what Gov. Henry McMaster called the “timid” approach the state took to closures and restrictions.
“It is no longer necessary to have a state of emergency, although it is still necessary for us to be smart, to follow the rules, to follow the guidelines and be very careful,” McMaster said.
In New York, the state plans to lift “virtually all” pandemic-related restrictions when 70% of adults have received at least one dose of the vaccine, Gov. Andrew Cuomo’s office said Wednesday in a news release. The state was then at 69.1%, according to the release.

Expiring vaccines are a new concern

With the lag in vaccination rates, some states report they have Johnson & Johnson Covid-19 vaccine doses that are set to expire before they get used.
“There were state health officials that have been sounding the alarm for months now, that they were soon going to reach the point where supply exceeds demand in these states,” CNN medical analyst Dr. Leana Wen said Wednesday.
The seven-day average of vaccines administered daily in the US was more than 1.12 million, a slight increase from earlier in June yet far lower than the peak average of 3.38 million shots per day reached on April 13, according to Wednesday’s CDC data.
For Johnson & Johnson vaccines remaining in the US, which only require one dose when distributed and have a three-month shelf life at refrigerator temperatures, lowered demand means that doses are going unused and may soon expire.
Nearly 11 million doses of the Johnson & Johnson vaccine — about half of the 21.4 million doses that have been delivered to states and other jurisdictions — have not been administered, according to data from the CDC. Potentially expiring coronavirus vaccines make up 1% to 2% of vaccines distributed to states, a source familiar with the federal vaccination effort told CNN on Wednesday.
The US Food & Drug Administration is “very, very carefully” looking into extending shelf life or reallocating Johnson & Johnson vaccines that are set to expire, Fauci said Wednesday.
The company is working to ensure its vaccines can be used and deployed effectively, Johnson & Johnson Chairman and CEO Alex Gorsky said Wednesday during a Wall Street Journal Tech Health event.
“We’re working very hard, both at the federal level at the local level, to do everything we can to make sure that these vaccines can be used and deployed in the very best possible way,” Gorsky said.
“The good news was we got a lot of vaccines out to meet this initial surge in demand, and now making sure we get the very best possible deployment and allocation and the distribution system gets even more agile, more flexible, not only here in the United States, between states, but in fact around the world will be work that we need to continue to stay focused on in the weeks and months ahead,” he said.