By Reuters and Emily Crane For Dailymail.com

Bitcoin’s value was still down 8.85% percent over the 24 hour period since Elon Musk‘s shock announcement that Tesla will no longer accept Bitcoin as a form of payment due to environmental factors.

Musk’s announcement on Wednesday evening initially caused a huge 17 percent drop in the price of the world’s largest cryptocurrency, but it recovered slightly during the day.

It comes after the billionaire Tesla CEO made an abrupt turn-about when he revealed his electric vehicle company will no longer accept the cryptocurrency as payment for his cars.

His revelation, which followed months of him boasting of his and Tesla’s investment in Bitcoin, initially saw the coin’s price plunge wipe off an estimated $365 billion from the entire cryptocurrency market.

Tesla had bought about $1.5 billion worth of Bitcoin back in February around the time it announced it would accept the coin as payment, according to a Securities and Exchange Commission filing. 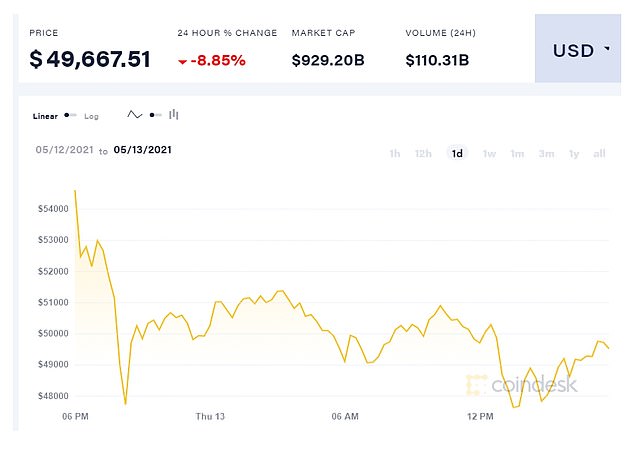 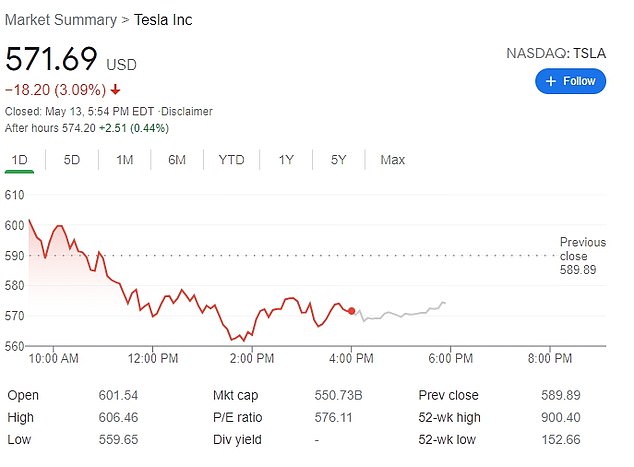 Musk, who has drawn criticism in the past for his ability to move markets, insists Tesla will not be selling off any of its Bitcoin.

Bitcoin, the world’s biggest digital currency, has surged five-fold in the past year alone. The rise comes amid an increasingly fraught debate over the environmental costs of the world’s most popular cryptocurrency.

Crypto is ‘mined’ by high-powered computers that require huge amounts of energy to continuously solve computational math puzzles. With each solved problem, a certain amount of coin is produced. While the machines use electricity, fossil fuel is a major category in electricity generation.

Environmentalists argue that the creation of the cryptocurrency may harm efforts to limit global warming. 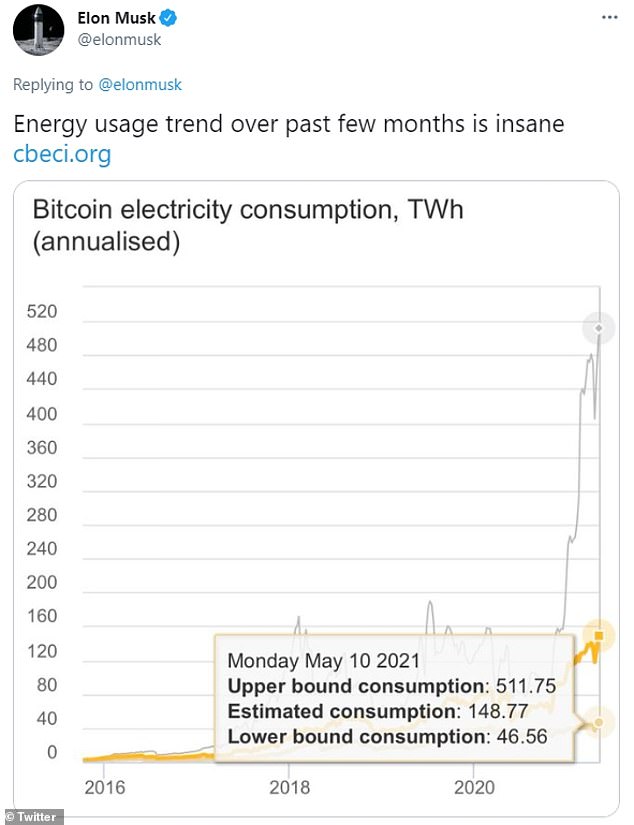 Bitcoin consumes almost the same amount of electricity annually as Egypt, according to an index compiled by the University of Cambridge. Musk tweeted a link to that study on Thursday, saying: ‘Energy usage trend over past few months is insane’

The rising price of Bitcoin in the last two years has resulted in carbon emissions increasing by more than 40 million tons, a BofA Securities report said. That rise is the equivalent of 8.9 million additional cars on the road.

That same reported noted Bitcoin’s energy consumption is comparable to that of major US corporations like American Airlines or even the US government.

It consumes almost the same amount of electricity annually as Egypt, according to an index compiled by the University of Cambridge that cites 2019 data from the US Energy Information Administration.

Crypto is ‘mined’ by high-powered computers that require huge amounts of energy to continuously solve computational math puzzles. With each solved problem, a certain amount of coin is produced. Data courtesy of Digiconomist

Musk tweeted a link to that study on Thursday, saying: ‘Energy usage trend over past few months is insane.’

He later tweeted: ‘To be clear, I strongly believe in crypto, but it can’t drive a massive increase in fossil fuel use, especially coal.’

‘As the price rises, bitcoin could consume as much energy as all the data centers in the world combined,’ said Alex de Vries, founder of research platform Digiconomist, which publishes estimates of bitcoin’s climate impact. 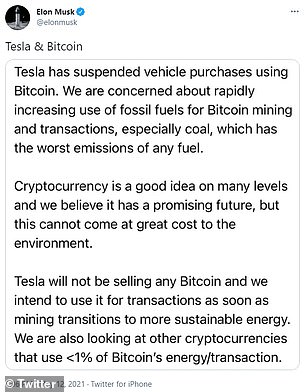 ‘At least other data centers are providing us with cloud computing used by billions every day. Hardly anybody is using bitcoin.’

It comes after Musk issued a statement on Wednesday, saying: ‘We are concerned about rapidly increasing use of fossil fuels for Bitcoin mining and transactions, especially coal, which has the worst emissions of any fuel.

‘Cryptocurrency is a good idea on many levels and we believe it has a promising future but this cannot come at great cost to the environment.

‘Tesla will not be selling any Bitcoin and we intend to use it for transactions as soon as mining transitions to more sustainable energy. We are also looking at other cryptocurrencies that use <1% of Bitcoin’s energy/transaction.’

His abrupt U-turn shocked some investors because of the CEO’s heavy investment in the coin, despite growing concerns over its potential impact on climate change.

They argued that Musk, who has marketed himself as a clean energy champion, surely would have done his diligence before making such a heavy crypto investment. 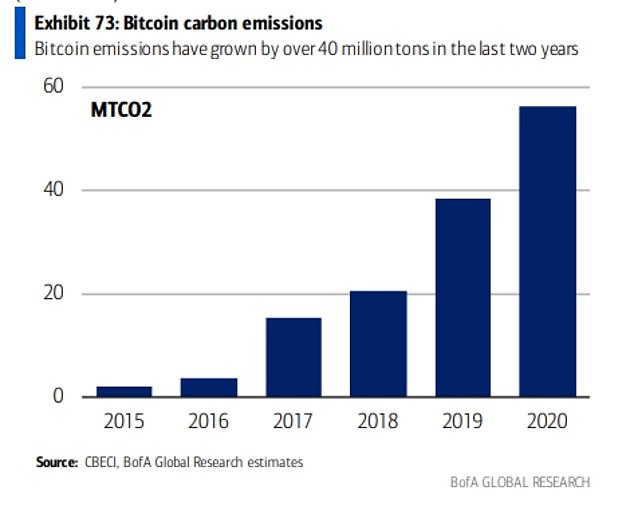 The rising price of Bitcoin in the last two years has resulted in carbon emissions increasing by more than 40 million tons, according to a BofA Securities report 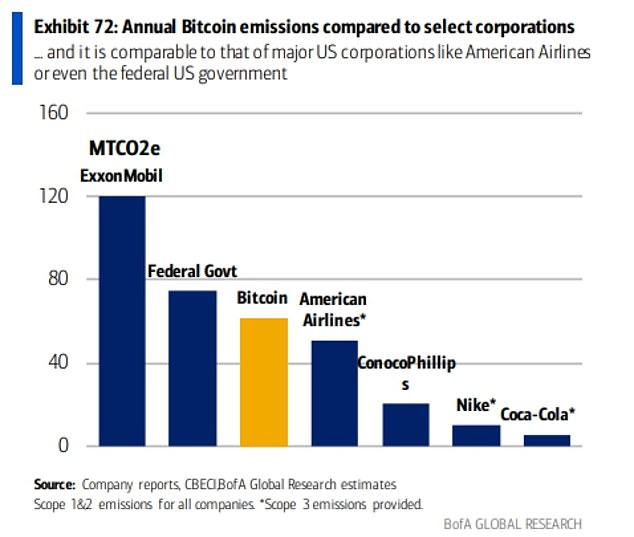 ‘All of a sudden, he’s not so keen due to environmental concerns. But why now?’ Nigel Green, CEO of financial adviser, deVere Group, told Forbes. ’Those issues surrounding the environmental impact have not come up in the last few months.’

Microsoft co-founder Bill Gates has already highlighted the negative impact mining Bitcoin has on the environment. ‘Bitcoin uses more electricity per transaction than any other method known to mankind,’ Gates said, ‘It’s not a great climate thing.’

A 2018 study published in Nature found huge farms of computers used to mine Bitcoin could produce enough greenhouse gases to raise global temperatures 3.6°F (2°C) in less than three decades. 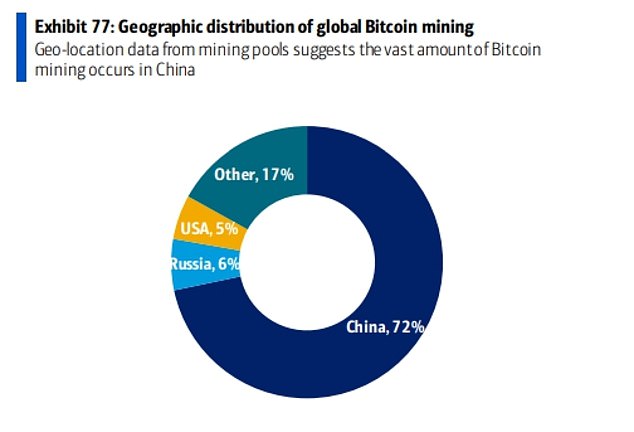 While most cryptocurrency mining takes place in China, major operations have opened up in a number of North American cities, where some officials are alarmed by the industry’s emissions

Studies have also shown that the annual carbon emissions from the electricity generated to mine and process the cryptocurrency is equal to the amount emitted by whole countries, including New Zealand and Argentina.

Bitcoin mining’s energy consumption also eclipses that of the world’s major tech companies that provide entertainment services, including the streaming giant Netflix as well as Apple, Facebook, Microsoft and Google combined – all of which also require huge amounts of energy to run their services.

By comparison, Google – the largest energy consumer of the tech giants – used 10 TWh in 2019. On March 13, Bitcoin was using 130.9 TWh (annualized). The UK’s electricity consumption is slightly more than 300 TWh a year.

Given the surge in the coin in the past year, mining operations have become increasingly attractive for investors, despite the environmental pushback.

While most cryptocurrency mining takes place in China, major operations have opened up in a number of North American cities, where some officials are alarmed by the industry’s emissions.

In mid-April, nearly 150 local environmentalists marched to the gates of Greenidge Generation, a Bitcoin mining facility in upstate New York, in a last-ditch effort to block its expansion.

Three days later, the planning board in the small town of Torrey voted 4-1 to allow Greenidge Generation to more than double the number of machines it has mining Bitcoin.

‘Everything we want to do to fight climate change could be erased,’ Yvonne Taylor, one of the march’s leaders, told Reuters.

The Greenidge mining facility had announced in March it would this year become the first Bitcoin mining firm with its own power plant to go public on the US stock exchange.

Communities with cryptocurrency mining in their backyard increasingly find themselves in David and Goliath-style clashes, said Taylor, the activist who opposes the Greenidge expansion.

‘Small local governments are being approached by very aggressive companies and, sadly, they become enamored with the money and pressured,’ she said.

Greenidge spokesman Michael McKeon said in an emailed statement the firm was doing all it could to address environmental concerns.

‘Natural gas is a bridge to the future and it’s an important part of the energy mix for New York State,’ he said.

‘We are committed to further investing in ways to enhance our green profile and are looking at various options right now.’

He added that the recent planning board vote showed the company had genuine local support.

‘The local community sees the value of the jobs we have created, the taxes we have paid and the impacts we have had on the local economy,’ he said, adding the facility also contributes power to the local grid.

Plattsburgh, a city in upstate New York, imposed a moratorium on cryptocurrency mining in 2018 after it became the city’s top power consumer.

And earlier this month, lawmakers introduced a proposal to suspend cryptocurrency mining operations for three years throughout New York state as it carries out a review of the industry’s environmental impact.

In mid-April, nearly 150 local environmentalists marched to the gates of Greenidge Generation, a Bitcoin mining facility in upstate New York, in a last-ditch effort to block its expansion 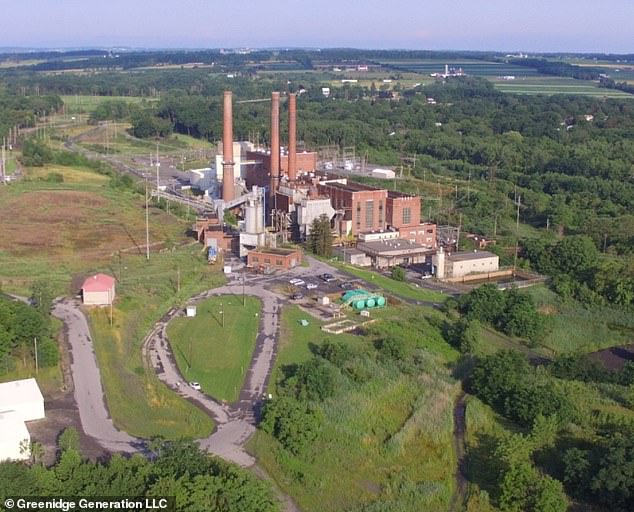 ‘At a certain point, this industry was using about a third of all of the county’s electricity,’ Diana Maneta, the county’s sustainability officer, said.

In 2019, Missoula County used emergency zoning powers to require new cryptocurrency mining operations to offset their energy consumption, such as by agreeing to purchase renewable power directly from new solar and wind projects, or developing their own clean electricity production.

The new zoning restrictions were made permanent this February, making Missoula the first US county to regulate cryptocurrency mining from a climate perspective, Maneta said.

Despite the pushback, cryptocurrency boosters say their profits do not have to be at odds with environmental protection.

What really matters is how much of the energy cryptocurrency mining consumes comes from renewable sources, he said.

In April, a nonprofit coalition launched the Crypto Climate Accord, a global industry-backed initiative urging cryptocurrency enterprises to switch to using renewable energy.

‘We want to help the crypto industry decarbonize,’ explained Jesse Morris, chief commercial officer of the Energy Web Foundation, one of the groups that put together the accord.

The idea is to get the industry to net-zero carbon emissions – offsetting any emissions it cannot cut itself – by 2040.

Energy Web, for example, plans to roll out a technology tool that will allow cryptocurrency miners to prove they are using sustainable energy, an innovation Morris said would help link investors with green crypto firms.

‘This industry isn’t going anywhere, so let’s make it green,’ he added.

But given bitcoin’s hunger for energy – and how much money can be made mining it – there is a concern it could eat up more than its fair share of renewables, pushing other activities to use carbon-intensive power, said Ketan Joshi, a renewable energy industry analyst.

‘A lot of success in reducing emissions could get canceled out by the demand from bitcoin,’ he predicted.